It's the new year, which means over the next few months everyone who has applied to grad school in chemistry (and other fields... there are other fields, right?) should be receiving responses back from admissions committees. Acceptance letters generally contain salary information, program information, and an invitation to a visit weekend. In chemistry, these visits are almost always paid for by the department. Yep: free trip, food, and drinks. But why?

There are two ways to look the motivation behind visit weekends. Decide the veracity of either for yourself:

Rationalization 1: Most good chemistry departments don't want to waste their time and money.* An admitted student in a graduate program is expensive: stipend, research supplies, tuition, etc. are all paid for by the department and/or the student's adviser. So it's in everyone's best interest to make sure students are picking the appropriate school for them. Hosting a visit weekend allows prospective students to meet their possible classmates, their future advisors, and see if the grad program and facilities are appealing to them. That way there's a better chance they are happy where they go, leading to a better chance of graduation.

Rationalization 2: If you throw free stuff at students who have been paying for school, offer them money, and paint an inordinately sunny picture of your grad program, you'll get more students. The more students you get, the harder you can work students, and it won't matter as much if some leave. Cheap labor! 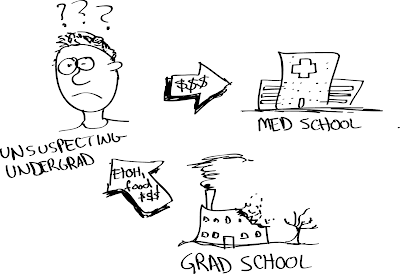 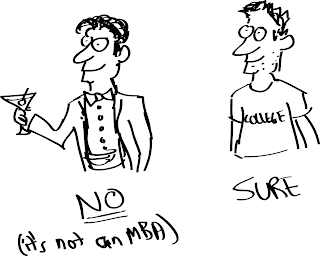 1. It's not an interview. You're not trying to impress the department. They're trying to convince you to make essentially minimum wage, working the equivalent of 1.5 to 2 full-time jobs for probably 6 years with minimal outside social contact or hobbies so that one person in your department can get approximately 5 more papers. Also you'll have to babysit undergrads. If you're going on a visitation weekend (except, I guess, at Scripps, which actually does hold interviews) that means you're in. You're guaranteed a spot. It's their job to impress you and convince you to attend.

That being said, don't dress like a slob; don't drink too much; don't deliberately offend anyone. Your professional career is beginning, and first impressions are kind of important. But it's not a med school interview or a corporate meeting: in grad school, getting work done is more important than showing off your suit and haircut. So relax and be yourself. Unless you happen to be an arrogant idiot.

3. Find the best and the worst about the program. Generally, admissions committees will carefully select which grad students host prospective students. They'll hand-pick the ones who still have their optimism; may the group that have just passed candidacy exams or who haven't had to TA in a while. Generally 2nd to 3rd year students. 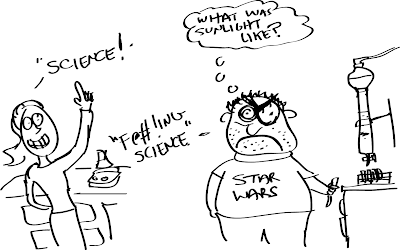 It's important to listen to these students: you want to find out about the good parts of the program! But make sure you seek out the embittered, late-stage students as well. You want a spectrum of opinions. Find at least one student who doesn't really want to talk to you. Have a conversation like this:

You: "Cool! What do you think of Professor Schmorey? His research is so cool! I want to be a PI! Do you like working for him?"

You: "Awesome! Is teaching really fun or super fun?"

In short, you need to know what the possibilities are. No department is as rosy as the admissions people want you to think. Ascertain what the emotional arc will be on your grad school journey.

Also, be wary of how much or how little effort/money the school puts into recruitment. Too much effort: are they desperate for students? Too little effort: do they even care? It's a courtship. Try to distinguish genuine enthusiasm from mere marketing.

4. Ignore the stipend (but do look at cost of living). Yes, it's cool that they're going to be paying you. At least, it's cool for about four weeks, then it's depressing, because you could be managing a McDonald's and making more money than that, but that would only be a 40 hour work week, you'd get benefits, and hey, you'd get infinity fries if you wanted them.

Point is: you're not going to get rich in grad school. That's not the point.  If a school doesn't pay enough to live off of, that's a problem, but pretty much every school will. Ask grad students about it on your visit weekend. But it's not a good idea to make a "high" stipend an important part of your decision. You'll be poor either way.*** What's more important is choosing a school that will benefit you in the long run.

Also, don't ask other prospective students if they got additional fellowships or signing bonuses, or brag about yours. You'll either wind up sad or you'll annoy everyone.

5. Learn about departmental seminars. No one really says this, oddly. I guess I think it's important because I've seen schools with very bad seminars and schools with very good seminars. Seminars (sometimes called colloquiums) are when the department hosts a speaker (usually an academic scientist; occasionally an industrial chemist) who gives 1 or 2 free lectures to the department about their research. Often there's coffee, muffins, cookies, tea, etc.

Departmental seminars can be very bad for several reasons: sometimes attendance is required; sometimes the material is boring; sometimes the speakers aren't engaging and the PowerPoints are weird and the artwork and data are definitely recycled from 1995, and who uses WordArt anyway? Usually this happens at lower-tier schools, where no money is available to pull in noteworthy scientists and so anyone within a walking radius is invited to lecture. In these cases, seminars can interfere with getting your labwork done, as you don't really gain anything from them.

But seminars can be very good. Ask current students about this! Some schools have fantastic speakers--Nobel prize winners,**** influential chemists, people whose names you've read or whose work you've learned about. These are great opportunities: you can network (important), you can hear interesting chemistry, and you can broaden your base of knowledge. In short, good invited speakers are an important, underrated factor you should consider in your decision.

7. Don't make it all about the research. Your undergrad advisor will sit down and look you sternly in the eye. "Make sure you're choosing a school for the science," he'll say (or she'll say). That's what a lot of people will tell you: to make sure the science is something really interesting. That makes sense, doesn't it? It's a research program! You'll be doing research every day! Isn't that important? 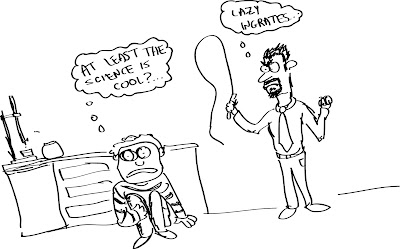 Yes, it's obviously important. It would be absolute drudgery to be stuck for an indeterminate number of years doing a project you hated -- or worse, were ambivalent about. So it's critical to pick a program that has a couple interesting-sounding research areas. Ask students on your visit weekend about their research: do they seem excited by it? Often it's not the exact research itself but the people involved that make the work exciting--if you have an encouraging research advisor and helpful labmates but a good project you may easily end up more motivated than someone who has their lifelong dream project but a manipulative advisor and bitter labmates.

You'll probably change what you're interested in during your first semester. Additionally, very, very, very few people end up doing for their career what they do in grad school. Tenure-track positions are rare, and they almost always require one or two postdoc appointments beforehand, and they involve a change in research focus. Plus, many people go into industry or non-traditional careers completely unrelated to their dissertation topic. So don't worry about finding the 100% perfect research fit. It's vital to learn about things other than The Science on your visit. After all, you'll be living there too.

8. Meet the professors you want to work for. Some people don't think this is very important. But you're committing a lot to the program--more than half a decade. Shouldn't the person who will hold your fate in their hands at least show up to meet you?

There's a lot of professors who don't go to recruiting weekends, citing busy travel schedules. To an extent, that's understandable. But is the professor you want to work for more interested in promoting him/herself than serving as a mentor to you?

Meeting professors and groups will also show you that group webpages are deceiving. Some professors who seem crazy good on paper are kind of weird and creepy in real life. Conversely, some folks with lame webpages or research that didn't strike you as appealing are engaging and exciting to talk to.

9. Don't do homework at the hotel. It's just undergrad. Don't take it so seriously. Use the free coffeemaker! Hang out with other prospective students and current grad students! Seriously: take the opportunity to socialize on the visits, even if you're tired.

Overall, remember: in the worst case, your visit weekend will mean free food and a free trip. Unless, of course, the university loses the paperwork and doesn't reimburse you for the plane ticket, in which case you paid $600 for a trip to a weird town but didn't get to see anything except NMRs.

* Some departments do seem to want to waste money and time, but that's another matter.
** There are exceptions, of course. Some schools don't have the budget to pay for prospective students to travel. Others only have enough money to pay for gas or meals. Some will make you arrange your own travel.
*** Obviously, extreme differences -- say $19k vs $25k for the same city -- might be worth considering.
**** Actually, from experience: Nobel prize winners are, more often than not, terrible speakers. But it's nerd cred to hear them, I guess.
Posted by vinylogous at 7:00 AM

What's on the internet?

vinylogous
Vinylogous was a graduate student in organic chemistry/chemical biology at a university in the United States.